This blog post currently appears in the Times of Israel:

Someone once said don’t get in the mud with the pigs, because you both get dirty and the pig enjoys it.

It would appear as if the BDS (Boycott Divestment Sanction) movement has developed quite an appetite for pigs. While it is tempting to indulge in pig puns, this is fast becoming a very serious issue. If it is not Roger Waters flouting his helium pigs decorated with stars of David at his concerts, it is the Council of South African Students who have deemed if perfectly acceptable to place pigs heads in the meat section of Woolworths stores in South Africa.

Why Woolworths? Why pigs? Woolworths, one of South Africa’s most respected and popular brands that sells home ware, food and clothing has been the target of demonstration and boycott by BDS SA. The fact that Woolies imports from Israel amount to barely a percent is irrelevant to BDS. They have firmly locked their target on the upmarket store and demonstrations, threats against shoppers and staff and violence have become the order of the day. Nearly 60 protesters, including children were arrested for disturbing the peace two weeks ago.

The morons from COSAS who placed a pig’s head in the meat section of Woolworths’ Sea Point branch have not only offended the Jewish community but Muslims as well. The porky creature is forbidden to both religions and to Jews the image or use of a pig has been seen as a symbol of anti-Semitism since time immemorial.

Why COSAS, who quite frankly should be concentrating on their university studies are so fixated on Israel at the expense of so many problems that plague not just South Africa but the African continent is beyond me. Civil war, dire poverty, starvation and disease are all problems that plague the continent but are ignored so that anti-Semites can indulge their latent tendencies.

Policies of BDS are counter-productive to peace and the ordinary citizens of South Africa who benefit from Israeli know-how in science, medicine, technology and farming are the ones who lose.

In a recent twist of events COSAS distanced itself from the Woolworths Pig Head incident by releasing a statement that said that while they unequivocally support the Palestinian cause, they distance themselves from the incident at Woolworths Sea Point, intimating that the culprit, Siphakhamise Ngxowa, was some kind of renegade who was also making statements to the media on their behalf. They claim he has been suspended.

This is in stark contrast to the outcomes of their executive committee meeting of their Western Cape Branch where it was stated:

“Due to media frenzy, much misrepresentation and attention seeking from the paranoid racist board of White Jewish Deputies we found it necessary to elaborately address the “Stop the Pigheaded Woolworths” and the “boycott Woolworthless campaign”. In light of this we decided to dedicate much of this statement to the Palestinian solidarity campaign, to avoid further misrepresentation of our views.” 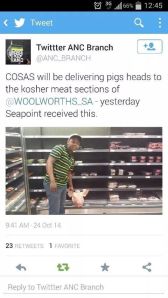 They also claim and are quite angry that Woolworths are “covering up at least 3 other pigs head” incidents at stores.

Outcomes were as follows (courtesy Politicsweb.co.za)

It has become open season on Jews. Expressing anti-Semitism is no longer politically incorrect or intolerant in certain circles. Instead it has become almost fashionable to Jew bash.

The silence from politicians, religious leaders and human rights organisations has been deafening. Not a peep, not a squeak, not an oink.

Jewish Voices for Peace purport to stand for Jewish values of morality yet they have not made any statement on the disseminating of pigs. As far as I am concerned, this negates any moral and ethical pedestal that they have placed themselves on. They are filled with righteous indignation when it comes to Israel, preferring to compose a laundry list of accusations than address a blatant hate crime against their co-religionists.

It must be a wonderful feeling to be able to comment on events that affect the daily lives of us Israelis from the safety and comfort of a computer a continent away.

Anti-Semitism has arrived in South Africa.  Placing pig heads in supermarkets is profoundly offensive to the Jewish community. It is also offensive to Muslims but nobody has uttered a word. The “Rainbow Nation” that prides itself on racial inclusion has earned itself a very dark stripe.  The Anti-Semitic cancer that is spreading around the world has found its way to the Southern tip of Africa.

I would wait for the statements of condemnation to come rolling in but I believe that pigs will fly before this happens.

Dark days for the Beloved Country.

3 thoughts on “This BDS piggy went to market…”