This blog post is currently posted in the Times of Israel: http://blogs.timesofisrael.com/growing-up-apartheid/

To whom much is given, much is expected.  I have been extremely privileged both in my career and as an Olah to not only have the benefits afforded new Olim but also the opportunities to understand the country from a perspective that not many get to see through leadership programs and experiences. It is in this light that I feel it imperative to speak up about what it was like to grow up in the Apartheid era. The word Apartheid is very emotive and provocative. It is being used by the anti-Israel camp to call into question Israel’s right to exist as a sovereign state and this is supported by the BDS (Boycott, Divestment and Sanctions) campaign and its annual hate fest that takes place in March across university campuses around the world known as Israel Apartheid Week. By painting Israel as a pariah state in the same colours as Apartheid South Africa it seems logical that the Jewish state should receive the same treatment, right?

Wrong. Israel is not a perfect country and I would challenge anyone to find a country that is.  Racism certainly rears its ugly head in Israel just as it does in every country in the world but it certainly is NOT an Apartheid state. The singling out of the Jewish state at the expense of other countries that do have discriminatory laws not only insults the profound suffering of South Africa’s victims of Apartheid but also exposes the true nature of those who subscribe to this rationale – anti-Semitism.

The Apartheid years were deeply painful for South Africans. For many of us they are hard to talk about.  Many of us feel ashamed that we benefitted at the expense of our fellow citizens who were discriminated against and treated like they were second class. Many of us feel ashamed because we did not do enough to fight the system. I feel a responsibility to speak out about what it was like to live in Apartheid South Africa, not only to give voice to those who suffered and whose experience has been hijacked as part of a racist campaign against another nation but also for Israel, the country that has given me a lot of opportunity and is the target of such derision. I have always been a curious, politically aware person and was no different as a child. I started to ask uncomfortable questions about what I was observing around me, much to the concern of my teachers and parents. Asking too much could get you or them into real trouble! I had an idyllic childhood, living in the very liberal suburb of Yeoville in Johannesburg, in the hub of Jewish life. I also lived opposite a park and this provided me with endless opportunities for fun and observation. The same could not be said for my peers of the same age who were not white. 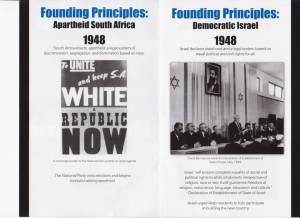 Children were taken to play in the park by their “nannies” (black domestic workers) who kept a careful eye on their charges. I remember asking my mother why nannies sat on the grass all the time. Didn’t they like the benches? My mother tried to explain to my childish curiosity that nannies were not allowed to sit on the benches. Or go to the same ablution facilities. I could not comprehend this. Why? What had they done that was so wrong? When I was about eight years old I made friends with Minnie. Minnie’s mother was a domestic worker and she went to school in the rural areas of the country. She was not afforded the level of education I was, being subjected to the “Bantu education laws” which ensured that South Africa’s black citizens received an inferior education. Fully equipped classrooms with text books, individual desks, electricity and extra mural sports and activities were not afforded to my peers who were not white. During the school vacations, Minnie came to stay with her mother, in her tiny room at the top of an apartment building which was where domestic workers stayed. 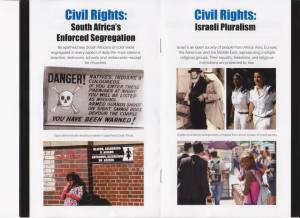 I remember being warned by Enoch the doorman that being friends with Minnie could get me into serious trouble.  It wasn’t enough that Minnie couldn’t swim in the public swimming pool or come to ballet class or get the same education I did, the friendship between two little girls, barely in double digits was considered a liability. This was South Africa under Apartheid. There was no freedom of the press , no freedom of movement. It was regime where multi-racial friendships were viewed as suspicious and where grown men and women were robbed of their dignity and discriminated against. It was a regime where men and women caught without their “pass” (identity) documents or out after their curfew were rounded up by heavily armoured police vehicles. There was no freedom of association and the laws of Apartheid not only robbed non-white citizens of their civil liberties but governed every aspect of life from sexual relations to education, to ablution facilities. There was no aspect of life for a non-white citizen that was not governed by the racist Apartheid laws. Democracy was a concept only enjoyed by the minority as only white people could vote. 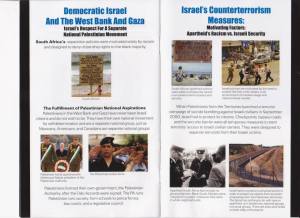 Then one day Minnie stopped coming to the park during vacations. I will never know the reasons why, perhaps her mother found a new job.  I joined a Zionist youth movement and we were taught to ask questions. Our social consciousness was raised.  We started to speak out against the system. On the 17th of March 1992 a national referendum was held, calling for an end to Apartheid. South Africans voted in their numbers to finally end this hateful, racist regime. Many of the Israel detractors fail to understand that the South African solution is not one size fits all. South Africans wanted to join together while Palestinians and Israelis each have their own national aspirations. To try and enforce the South African solution on us is patronizing and belittling to both sides. The 27th of April 1994 was a profoundly emotional day. South Africans from all walks of life stood in endless lines to cast their votes. This was my first time voting and I stood in line with Johanna, our domestic worker, who couldn’t believe that finally she could vote. We both cried. I remember visuals of the elderly in rural areas, brought to polling stations in wheelbarrows, so excited they were to finally see the birth of a democratic South Africa. The post-Apartheid road has been a long and arduous one, fraught with complexities. South Africans tried to bring healing with the establishment of the Truth and Reconciliation commission where both sides could express pain or remorse. Perhaps there will come a day when Palestinians and Israelis can have their own truth and reconciliation process. It is painful but to hear each other’s experiences and acknowledge mutual pain may bring much needed healing. Israel is a vibrant and flawed democracy but is most certainly NOT an Apartheid state. Our detractors have stolen this from the victims of Apartheid – it is time we honour them by taking it back. 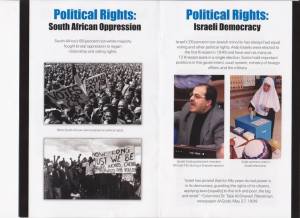 2 thoughts on “Growing up Apartheid”