I am incensed. Outraged. Fuming. Enough is enough!! I am climbing on my battered soapbox to appeal to you all – it is time to raise our voices, scream, shout, blow fire and fight the rising hate. It is not enough to say “it is terrible” or sit on the sidelines and hope that someone else will fight the battle – we all have to show up. And the timing could not be more important!

The visuals coming in from the ultra-right or neo Nazi or whatever label one chooses to assign those spewing hatred that would not be out of place in Germany circa 1939, are beyond offensive and should have absolutely no place in our society.

Charlottesville may have brought rising anti-Semitism into global consciousness with the repulsive visuals but the reality is that this cancerous hate has been bubbling under the surface and now the situation has reached boiling point. The KKK and their ilk never went way – they were just dormant, looking for the right opportunity to don their bed-sheet outfits and flaming crosses and now their cause has been given a tailwind. In a recent poll, it was found that 1 in 10 Americans find neo-Nazi speech acceptable. Did we not vow NEVER AGAIN?

Growing up during the Apartheid years in South Africa, I witnessed what happens when racism and discrimination is allowed to flourish. This heinous, racist regime was brought to its knees and eventually ended because citizens said ENOUGH. Although there is much healing that still needs to happen and the road to reconciliation takes many detours, there is much to be gained from working hard to overcome past mistrust and hurt. 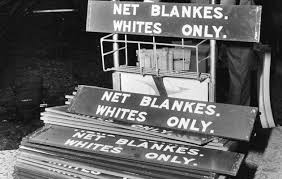 Anti-Semitism is oldest hatred in the world. The premise doesn’t change – just the outfit. Whether it is disguised as anti-Zionism, calls for boycotts from BDS, snide WASPY comments, ultra-left intersectionality or neo-Nazi blood curdling hatred, if it walks like a duck and quacks like a duck – it is a duck!

At the risk of sounding alarmist, the death camps like Auschwitz were built on words and this kind of speech has resulted in acts of violence across the world and they also embolden the latent racists to crawl out of their holes. From the murders of Jews in the Hyper Cacher in Paris to repugnant social media posts in South Africa, the march of hate in Charlottesville to the poster child for intersectionality, Linda Sarsour, saying “Zionists are creepy” or her comments that “Zionists cannot be feminists”. Linda I will meet you at the intersection of Zionism and Feminism anytime! 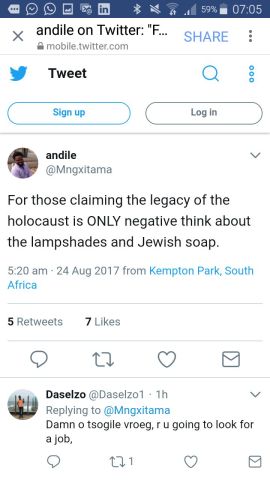 The leader of South Africa’s “Black Land First” movement tweets like a twit!

This is not a new and there is very little difference between the hate invective of neo-Nazis, Hamas or even BDS who call for the destruction of the state of Israel We are not talking buildings – but people

The oldest hatred, anti-Semitism is rising. Has risen. Continues to rise.

I think it was the wise Hillel in the Ethics of our Fathers who said “If I am not for myself, who will be for me? If I am only for myself, what am I? And if not now, when?” –

So the next time you see a swastika or even hear the call “from the river to the sea Palestine will be free “remember that these share the same root – hatred.

I am appealing not just to my Jewish brothers and sisters but to anyone who wants to see this cancerous hatred ended. Stand up. Use your voice. Take action. We have the means, now we need the numbers.

It is time to say that it is no longer open season on Jews. Who is joining me?

3 thoughts on “The time to rise”