Do you remember when a protest was a group of people with signs singing give peace a chance or gathering in an orderly fashion?

Now I have been to my fair share of protests. I have protested war in the Balkans along with black students during the Apartheid years, I have protested Hezbollah’s 2006 war against Israel (all this while walking around carrying an Israeli flag and spotting who I knew amongst the crowd). I have protested horrendous crime statistics and incidents in the streets of Johannesburg and I have protested South Africa recalling their Ambassador to Israel during the 2010 Mavi Marmara incident. This particular protest took place of a golf course but that is a story for another time.

For the last seven weeks, arch terror group, Hamas, have been staging what they call “the Great Return” protests on Israel’s southern border with Gaza. This is the greatest con artist production of all time because they have successfully managed to pull the wool over the eyes of the world, especially the media and numpty Bernie Sanders who believe their drivel that these protests are peaceful and all about returning home to “lands that were stolen”. Or the moving of the US Embassy to Jerusalem. Or Jerusalem. Depending on the media or the weather, this story is interchangeable.

Carefully planned and coordinated, Hamas encourage the population to march en masse to the border fence, break it down and swarm into Israel. It is highly unlikely that arch terror organization Hamas want to enter Israel peacefully while singing Kumbaya and handing out flowers. Don’t believe me? Believe this guy – leader of Hamas, Yahya Sinwar.

Make no mistake – these are not protests, these are acts of war. And they are not about Embassies or capitals but about an assault on Israeli sovereignty.

Armed with Molotov cocktails, axes, guns, rocks, burning tires, shooting at our soldiers and forcing civilians and children to the front line, Hamas have made their best efforts to breach Israel’s borders. Kites with incendiary devices have been flown into Israel, setting fire to fields, burning tires has created a health and ecology disaster and in the last 10 days, the Kerem Shalom crossing that allows for vital humanitarian aid and the transfer of fuel and gasoline has been torched.  In the last two days, Hamas have refused to allow in much needed food aid into the beleaguered strip. 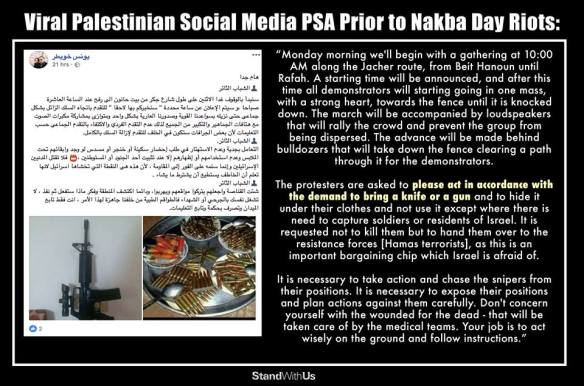 What one needs to bring to a peaceful protest

The Israel Defense Forces have repeatedly appealed to citizens of Gaza to NOT come near the fence and to go on with their lives because they have no choice but to defend Israel’s borders. Hamas using their civilians as human shields is not a new story; it is a sick and twisted reality and gross example of how child abuse is tolerated by the global community. The result of this is nearly 100 dead and thousands injured (although a vast percentage of the dead are terrorists from various organisations) and Hamas, delirious with glee at the optics that have been generated, that guarantee sympathy for them and opprobrium for Israel.

I have been to the border with Gaza during these last 7 weeks.  I have breathed in the toxic tire fumes and been moved by the IDF for my own safety because these peaceful protesters started shooting. I have seen those burning flags and chanting “death to Israel”.

My appeal to you is that before you take what the media says at face value; please investigate the truth for yourself. An alarming trend that I have experienced personally is the Israeli narrative being shut out by the media. Like this video clip – warning contains scenes that may be upsetting.

The only thing now left to protest is the level of hypocrisy from the international community and snide derision of an ignorant media who are complicit in all of this because the less the condemn Hamas, the more they create the space for the terror organization to exploit their civilians. That is worth a protest. A peaceful one.